[Editor's Note: The author lives in a perpetual state of cultural lag. Frequently, he finds himself "discovering" things that have been around for some time, usually at least 3-5 years. Naturally, he wants to discuss these things with people. But since most people have moved on from whatever the author is currently consuming, the conversations are typically awkward and unproductive. However, the author remains obstinate about his cultural lag and has decided to embrace it. This is one of many obsolescent reviews he will write. Please note that the reviews aren't obsolete (words distinctified) because they are still of some use, however diminishing they may be in the popular lexicon. The author is of the opinion that useful things, particularly media, tend to remain useful. Please note that the author does not possess a Reviewer of Things [Interviews, Networks, Health, Entertainment and Leisure] License (aka ROTINHELL) and his opinion(s), therefore, do(es) not actually matter. Share and enjoy!] 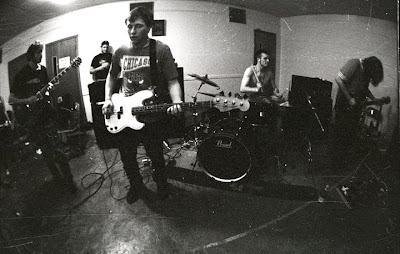 Loose Lips Sink Ships were an instrumental band from DeKalb, IL. They went on a couple of tours, recorded a couple of albums and bent a couple of neurons in people's brains with their brand of rock and roll music. I first met guitarist Matt Frank and bassist Steve Marek when my old racket-making band1 played a number of shows with their first group, a noisy throwback to the glorious grunge of the 90s called X.Y.U. (like the Smashing Pumpkins song).

But Loose Lips Sink Ships, adding drummer Jacob Boulay and guitar Conor Mackay, is much more than a grunge band. In their earliest incarnations, they called to mind post-rock groups like Gremlins, Mononucleosis and Explosions in the Butt (You know you want to click that link). But as the band recorded and evolved, the music moved from simpler musical narratives to complicated and painstakingly arranged instrumental music. The band eschewed simple rising and falling dynamics by interrupting songs' flows with starts, stops, bloops, jumps, bleeps, skips and poops. Lots of poops.

The end result was guitars that sounded alternately like squealing noise, warbling warblers, Dr. Alfred Kunkleberg, slippery noodles and pure, unabashed sloth sex (three-toed, of course). The best parts of their music, for me, are the moments of brilliance that lurch from the song structure seemingly at random and are gone before you really catch them. Upon repeated listening, however, it is advisable to sit at the ready with your audio net, waiting to pounce on those fleeting moments of brilliance. When caught and dissected, you will see they make a mess because of their hard exoskeleton are not at all random but are instead carefully orchestrated. Almost too carefully... 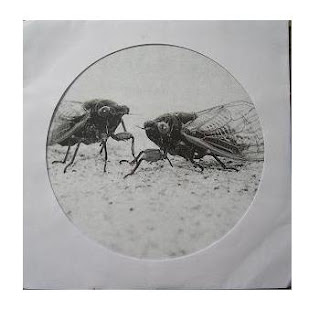 As the name suggests, this was Loose Lips Sink Ships' first release. The EP features four tracks, named "No. 1," "No. 2," "No. 3" and "No. 4," which run the gamut from post-rock to bizarre lit-rock. The arrangements show potential and occasionally hint at future LLSS records. The guitars play back and forth a bit; the drums don't do much, but they don't get in the way either.

"No. 2" features a chiming guitar intro that gives way to an uber-heavy, severely tuned-down-to-A guitar sludge and noise fest. "No. 4" has flashes of brilliance but feels unfinished. "No. 3" unsettles the listener with a faux interview about a rock star's obsession with David Bowie and cocaine.

They're all interesting, but the real gem of the record is the opener, "No. 1," which features a pretty post-rock landscape punctuated by sound clips from Anton LaVey, founder of the Church of Satan2. The beauty of the arrangement and the juxtaposition of LaVey's discourse present a puzzling and intriguing contrast. The sound clip stops abruptly while LaVey discusses metaphoric human sacrifice and the song explodes and expands exponentially in a strangely uplifting way.

And now you're a Satanist. Hail the Dark Lord and get cooking. 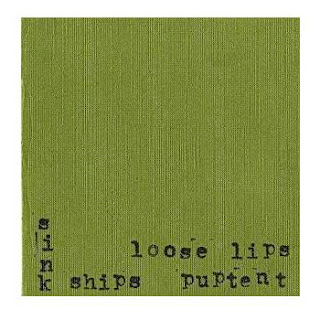 The Loosey Gooseys released this, their only LP, in 1965. Pooptent features some of the same post-rock meddlings as EP #1, but the band has quit the soft-slightly less soft-medium-slightly less medium-kinda loud-loud-explodey format that most post-rock follows, instead opting for a give-and-take-and-give-again-and-then-add-some-more-hyphens structure. The drumming is busier on this record, but the drummer's business combined with good-but-not-great production means that some of the more bustling and complex sections come across as a cacophony. The drum parts are interesting but occasionally difficult to discern on the record.

However, this is mainly a guitar band. The typical interplay between the guitarists features one guitar noodling long, legato passage while the second guitar makes huge waves of noise. At its best, the album's arrangements jump and shift, making abrupt key and rhythm changes that leave the listener equal parts aghast and giddy. High points:

-"Out to Dinner with Avocado" marks the band's departure from simple post-rock by throwing in leads that are equal parts J. Mascis and Randy Rhoads before delving into sludge metal and ending with one of the sickest, if fleeting, riffs you'll ever hear.

Much of the rest of the album follows the previous EP's post-rock theme, albeit with some more interesting twists and turns. But this ain't no Mono rekkid. 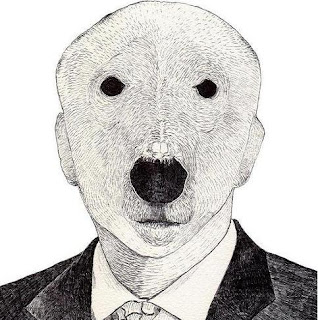 Sweet Jeebus does the cover art creep me out...

From the avant-garden coral intro of "Oh, Debit!" to the final dissonant harmonics of "The Wisdom of Karl Malone's Sternum Fin," the Loose Lips' half of this compact disc shines like diamonds shining in the shiny sun's shine. This is a focused destruction of your mind, body, will and bowel resiliency. This is Loose Lips Sink Ships at the top of their game. This is [better than] Sparta.

The El Pin Meldou half of this split is bogged down by a complete lack of band information anywhere in the vast tubes of the Internet. And how am I supposed to write about people I cannot stalk on the Internet? I digress... 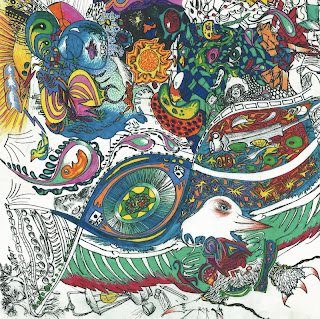 The guitar sound that kicks off the opener, "Coach Kukoc's Croation Couscous," sounds exactly like that. And you'll never forget it once you hear it. Consider yourself warned. The rest of the track absolutely slays, too. Moreso. Tenfold.

The next tune, "Pentwater," gave goosebumps to 30% of all test subjects under controlled laboratory conditions.

The final track, "Fudge Dunk," is, oddly enough, a saxophone-driven barnburner, so get your pitchforks out and raid the nearest farm whilst this song plays at top volume. Be sure to restart Side B of the record, though, or else your raid will only last five minutes and fifty-nine seconds. 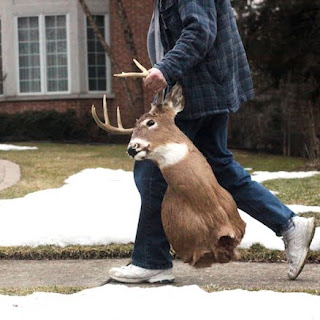 I don't have the Victor Villareal (Cap'n Jazz-Ret.) track, but it's probably a pretty good acoustic-guitar-and-singing type song. The LLSS track is the version of "Sarah Palin's Parasailing" from the release below. 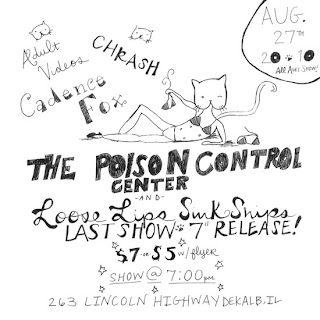 This was one of the band's final shows. Let me pause to tell you that I was at that show and they were loud; it was like Puh-shwough! [Ed. Note: That's the author's interpretation of an explosion.3] And the opener was The Poison Control Center from New Hampshire or South Carolina or Iowa or one of those early primary states. And let me tell you something about THAT band: Their fanclub phone line is some bullshit. All of the operators want to know "what you, your loved one or your pet 'got into.'" I just wanted some tour information and they SENT THE FREAKING FIRE DEPARTMENT AND EMTs TO MY HOUSE!!! IS THAT HOW BANDS FROM MANCHESTER TREAT THEIR FANS?!!

[Prolonged silence to let that sink in.]

"Sarah Palin" was featured on the aforementioned Eating Happens split with Victor Villareal and is probably the best of the new tracks with the band stretching the melody and bedazzling it in a stylish manner. "Warbling" is maybe the band's most challenging and rewarding composition's, while "Sunny's Song" is slow jam with a gorgeous, soaring melody. "Dr. Alfred Kunkleberg" is driven by a bass guitar to his laboratory on campus, where he spends the day studying geographic trends of uranium-indicating plant species with an eye toward using his university position to net consulting jobs in the mining industry4. You didn't think he was a medical doctor, did you?

The rest of the tracks can loosely be described as "Loose Lips Sink Ships torpedo your brain's anti-submarine warfare (ASW) pickets." The opener, "Oh, Debit!" comes across a bit sloppy, but the band quickly warms up and fires through a fantastic set that includes a patriotic interlude, a saxomaphone, a medley of favorites cleverly labeled "Shank Responsibly" on the track list and "Holy Hot Flash Batman!" as an encore. After their performance, the band was sentenced to 13 years in grammar prison for excessive use of the exclamation mark in their song titles, though the sentence was commuted for using consecutive consonants in a congenial manner.

Rumor is, a DVD of this show is circulating in Lagos' bustling film market.

RATING: +10 to alliteration, but no points for assonance


All of Loose Lips Sink Ships' music can be purchased from their Bandcamp page by naming your own price (except on the "Eating Happens" split; you have to buy that for $5). As for naming your price, I recommend typing in "My Firstborn" for EP#1, in keeping with the Satanist theme.

3 This is actually a recreation of a stranger once describing "one time when he saw AC/DC in the '80s."

4 Is Dr. Kunkleberg acting in a professional, ethical manner? Please write a 1-3-1 essay on the morality of Dr. Kunkleberg's research. I expect it on my desk no later than Worsday.

* Happy hour is from 3:24 a.m. to 4:24 a.m. CST. Void where prohibited. All states subject to blackout dates. No refunds given. Avoid promotion at all costs...just buy the record.