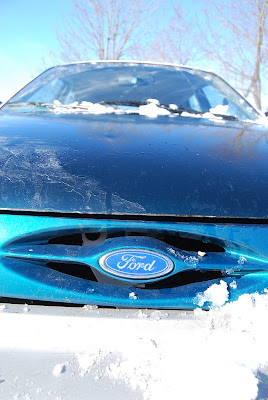 Before I get too deep into this post, please note that Alan has already written about this and will probably include photos in greater detail.

Last Saturday, Alan and I again met at our LeMons headquarters for Round 2 of suspension work. Having more or less completed the front suspension, we moved on to swapping the rear suspension from the ZX2 with that of our super-sweet race car1.

Anyway, while dismantling the rear suspension on the LX, we noticed that both rear strut hats had some serious rust problems3. While a half-assed weld job had been peformed on the passenger-side strut, they were both in pretty rough shape. Team technical advisor Alan's dad suggested sliding 3/8"-1/2" shaped-metal discs under the hat as an alternative to fixing half-ass weld with another half-ass weld. So we may do that eventually, because the strut hats won't last long the way they are, especially at Ford Escort LX racing speeds4.

We also ran into a giant rust block that was apparently the rear brake distribution point. With a little luck, we only had to cut one brake line to pull the suspension apart. And Alan forcibly removed one of the e-brake lines, leaving the emergency brake inoperative.

After that, we undid the bolts and the suspension fell out. Well, actually it didn't. The driver's side rear strut didn't want to leave its comfy home, poking out of the strut hat. 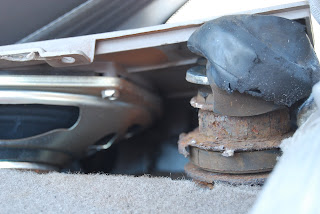 So we broke it to make it fit through. It wasn't difficult, as the spring had already broken in multiple spots and the top of the strut had rusted into memory. Then the entire rear suspension dropped with a thud.

While I had been loosening the bolts on the LX suspension, Alan had done a significant amount of work on the newer ZX2. This came apart much easier, though Alan broke some bolts pulling it apart. No biggie, though, they are on parts of the car destined for salvage anyway. The ZX2 suspension fell right out. For realsies.

We took a break for a run to get a better brake line wrench and a new brake line. The brake line was easy enough to get at the best place ever, but we had to try three places before we found the right wrench.

We then had to attach the brake lines. After Alan miraculously unscrewed the old broken brake line from the aforementioned rusted mess, he put in the new brake line, which was about 34 feet too long. So he bent it a few dozen times to make it work. The other side didn't fit real well, but we bent some more stuff to make it work6 .

With brake lines attached, we moved on to bleeding the brakes of any air in the brake lines. This went fine. It was really easy and everything went perfectly. The end7.


1 Did you know that race car spelled backwards is irrelevant to this post? Or is it?
2 This joke trademark Todd Stura, LLC or something.
3 At this point in writing the blog, I became distracted by this. Yeah, there are a whole bunch of them.
4 Reaching mind-blowing speeds of 38 mph!
5 While this seems like an innuendo, it isn't5A. A stronger, stiffer sway bar reduces body roll in the car.
5A It is.
6 The emergency brakes remained unattached, though. I don't know that a stationary car runs into many emergencies.
7 Actually, the bleed screws on the calipers were completely rusted and broke off when Alan attempted to loosen them. We bled the brakes a little, but there is still a ton of air in the lines. Alan had two spare calipers, but the passenger side rear caliper has a stubborn bolt that refuses to come off. Having been defeated by the car a few times over the course of 9 hours, we called it quits. As it sits, the car has no real braking power (brakes don't maintain pressure well due to air in the lines and e-brake is disconnected) and no real sway bar. Minor details.

But Alan picked up a pair of Miata calipers, which will work on an Escort, for $50 yesterday. So we'll slap those on sometime in the coming weeks. What could possibly go wrong?
Posted by Eric Rood at 6:47 PM