Last weekend, my co-conspirator Alan and myself, with Jenny along, headed to Gingerman Raceway in South Haven, Michigan, to witness American Irony, one of the many races in the 24 Hours of LeMons series. We left shaking our heads in awe and extremely excited to be entering the Rod Blagojevich Never Say Die 500 in October. Rather than give you a long, boring, text-heavy rant, I'll give you pictures of the award winners. And I may post more pictures in multiple parts. 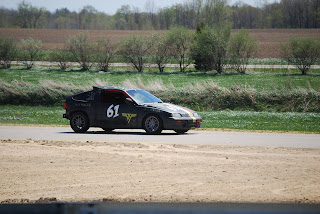 Winner on Laps: #61 Clueless Racing CR-X. This car was fast; I think it must have had an engine swap or some kind of tuning, because it booked. In addition to running 417 laps, it also ripped out the top time for the weekend with a 1:46.547 lap. 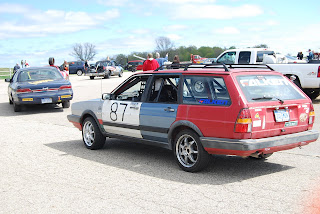 Index of Effluency1: #87 Chicken and Waffles VW Quantum Syncro Wagon. This make/model was apparently THE lemon of its time with a mushy, die-y all-wheel drive system. The team had previously run Fieros at LeMons races, but they ran a slow, steady race at Gingerman with this sweet wagon, racking up 384 laps for a 9th Place finish. 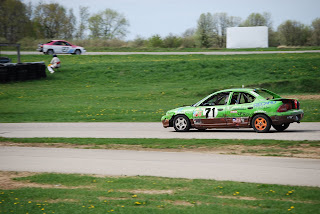 Winner, Class 1 (THE GOOD) and I Got Screwed Award: #71 Latch-Key Kids Plymouth Neon. You wouldn't know it looking at this car, but this was a monster on the track, racking up 415 Laps. It actually held the lead for a good part of Sunday, but the #61 CRX had a 22-gallon fuel tank installed, which allowed it to fend off the Neon. For a solid 7 or 8 laps, this Neon duked it out with CRX, trading leads every time they came around to where we were sitting at Turn 1. Alan and I were rooting for this pugnacious little Neon and were glad to see it walk away with hardware. 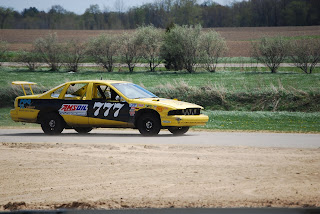 Winner, Class 2 (THE BAD) and Least Horrible Yank Tank: #777 Joe Dirt Mullet Rockers Sponsored by Aquanet Chevy Caprice. This was as fast as anything else on the straights, and its V8 sounded like American muscle with the exhaust pipes blowing out the side. There was no mistaking the growl of this monster on the track. This car finished fourth overall with 394 laps. 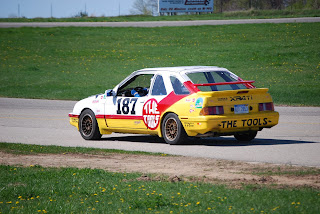 Winner, Class 3 (THE UGLY) and Grassroots Motorsports Most from the Least Award: #187 The Tools Merkur XR4Ti. This car ran a smooth race, was fast, and hit every corner just about perfectly, clocking 394 laps for a third-place finish. It also ran the second-fastest lap of the weekend, a 1:46.998 trip around the circuit. If you don't know about Merkurs, they were a failure. A big one. And that's why LeMons loves them. 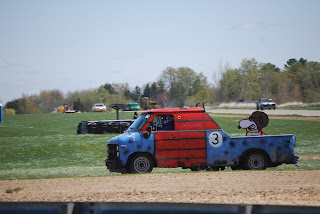 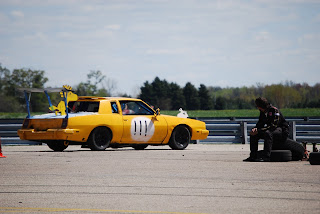 Organizer's Choice: Morrow's Auto #3 Snoopy Van and #111 Woodstock Grand Prix. These cars, from the same team, epitomize what LeMons is all about. In addition to an amazing and well-executed theme, these cars are ridiculous. The Grand Prix rumbled like an earthquake (when it was on the track), but the Snoopy Van is the real deal. After running it in a previous race with the same appearance, the team decided to make it a MID-ENGINE, TWIN-TURBO. That's right, this iss a racing van. Unfortunately, the driver's side turbo apparently caught on fire during the race, but it didn't keep the van off the track. 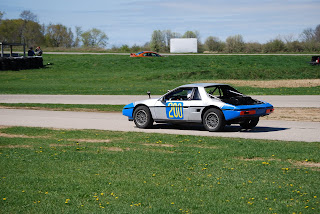 Most Heroic Fix: #200 Double Jeopardy Pontiac Fiero. When we walked through the pits on Saturday, we saw this pit crew feverishly working on what appeared to be the engine. We didn't know what the problem was, but it really looked like they were tearing the entire engine apart. As it turns out, they were tearing the entire engine apart. By the time they returned to the track on Sunday, smoke poured out of the back of this car while it limped around the outside of the track like it was VW Bus at a Grateful Dead show in 1970. The story later came out that the crew had simply removed all of the non-functioning parts from the cylinders, leaving exactly 1 cylinder that worked. Needless to say, it was not a fast car with only a few CCs of engine, but it was a gutsy one. For the exclamation point, the team fastened the busted pistons onto the hood of their rolling wreck. 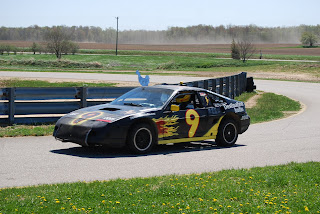 Judges' Choise: #9 Midwest Engine Destroyers 1988 Pontiac Fiero. The judges liked this because the team had somehow wedged a 3.8L V62 into the engine compartment of a Fiero. It didn't fit all that well, judging from some of the pictures I've seen, but it had them running in the top 10 for a while, even though it eventually finished 33rd in the field with 274 laps. 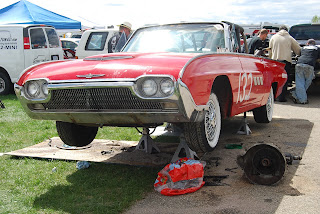 Epic Repair Failure3: #132 Police Brutality Ford Thunderbird. Sure this car looks nice and shiny, but a close inspection of the finish reveals that it's just bright red paint over rust. Lots and lots of rust. And the whitewalls are also painted. The team who brought this beast didn't even know if it really ran before driving from Maryland. And it really didn't. The Police Brutality squad ran it for a while on Saturday before the transmission asploded. These guys put in countless hours of work overnight Saturday and into Sunday. When we arrived just before the "Gentleman, try to start your engines" call, the car appeared above. Yep, that's the transmission on the ground next to it. We walked past it a couple more times later, and it was still on jack stands. Jenny later noticed the team pushing the car up pit road. I later found out the car was just welded into drive, basically, and that the team needed to push-start it. But that they did, and with the Team Captain behind the wheel, it pulled out of the pits to the loudest cheers all weekend with less than an hour of race time remaining: 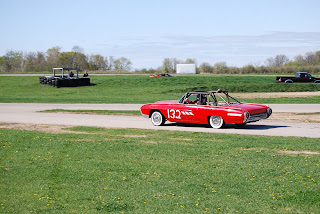 As the Chief Perpetrator Lamm later noted, 15 laps or so would have cinched up the Heroic Fix award. Five laps into its return, I thought I noticed a trace of smoke behind the car as it entered Turn 2. By the time it was clearing Turn 3, it had started to billow smoke. Before it even sniffed Turn 4, flames had made the Thunderturd a Firebird: 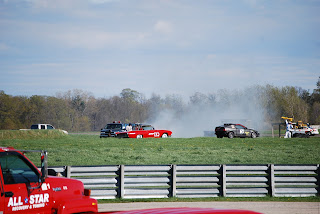 So it goes at LeMons. The car was definitely the crowd favorite, and the Police Brutality team is apparently going to show up at their next race with a BMW V12 shoehorned into an old Cadillac.

**Edit: On the LeMons board, the Police Brutality team captain noted that the car was only a few laps short of the Index of Effluency trophy, rather than the Heroic Fix. I apologize for this misquote. Additionally, he said the Bimmer V12 will likely go into this Thunderbid.**

Suffice to say, I am excited.


1 The Index of Effluency, basically, is an award that is handed out to the car that does the most with the least. This is somehow different from the Most from the Least award, but really it's a no-brainer that a serious crapcan wagon gets this one. As defined by the Greek God Wikipedeus, the Index of Effluency is "presented to a car considered unlikely to finish the race at all, let alone finish with a respectable number of laps completed." Well said, Gentleman Philosopher Wikipedeus.
2 This would be the same V6 found in common GM vehicles like the Pontiac Grand Prix, Buick LeSabre, or, you know, this Fiero.
3 This award was actually made up over the course of the weekend by the #142 Adopted by Jets Saab. Their car spent a similar amount of time in the pits, as apparently they were the sufferers of Murphy's Law for the weekend.